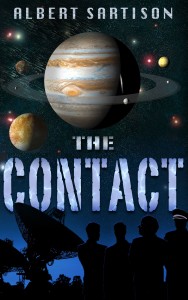 The ascendancy of mankind is being decided on Jupiter

In the 22nd century, mankind has assimilated the Solar System within the orbits of the inner planets, and is gradually moving further out, beyond the asteroid belt, towards the outer planets. The recently discovered technology of remote manipulation has given people the capability of altering the orbit of planetary-size celestial bodies, laying the foundation of a new era for the human race: the terraforming age. The colonisation of space beyond the limits of the Solar System has become only a matter of time.

Soon after the first successful test, changing Mercury’s orbit, a strange object moving from the depths of space towards the centre of the Solar System enters the field of vision of a telescope at an observatory in Chile…

The spacecraft reaches Mercury at the intended time and begins sending signals to determine the precise orbit of the planet. The experiment begins that evening. A command is sent to increase the speed of Mercury from the Experiment Control Centre at the moon base. Three hours later, the International Space Station, scientists at the moon station and also many other groups of scientists on Earth, register a decrease in the diameter of Mercury’s orbit round the Sun by two percent. Once the experiment is over, Mercury’s orbit is slowed down to its previous level.

Soon after, a Chilean observatory observes a space object moving from outer space which could potentially collide with Earth. Precise calculations of its flight trajectory are not yet possible because it is so far away, and the orbital telescopes, even those in orbit round the gas giants, are currently being used in support of an experiment testing remote manipulation technology. In view of the low speed of the object, the time for it to reach the Earth’s orbit is estimated as hundreds of years, so a low priority is given to clarifying its trajectory. Nevertheless, the instruction is entered into the central computer for a second observation of the object a week later, to confirm the low priority status.

At the next observation session, the object is not detected. The telescope control system probes the space sectors in the region of the assumed location. The unidentified space body is eventually detected, but its actual position differs greatly from that initially assumed. Following its programmed instructions, the telescope computer corrects the calculation data and raises the priority for finally calculating the trajectory. The third observation session is appointed for 24 hours later.